Warning: "continue" targeting switch is equivalent to "break". Did you mean to use "continue 2"? in /home/www/kawaiikostumes.com/wp-content/plugins/essential-grid/includes/item-skin.class.php on line 1321

Warning: "continue" targeting switch is equivalent to "break". Did you mean to use "continue 2"? in /home/www/kawaiikostumes.com/wp-content/plugins/revslider/includes/operations.class.php on line 2854

Warning: "continue" targeting switch is equivalent to "break". Did you mean to use "continue 2"? in /home/www/kawaiikostumes.com/wp-content/plugins/revslider/includes/operations.class.php on line 2858

Warning: "continue" targeting switch is equivalent to "break". Did you mean to use "continue 2"? in /home/www/kawaiikostumes.com/wp-content/plugins/revslider/includes/output.class.php on line 3708
 Nikko Edomura - KawaiiKostumes
Skip to content Menu Close

~ Story and photos by Esther Dacanay 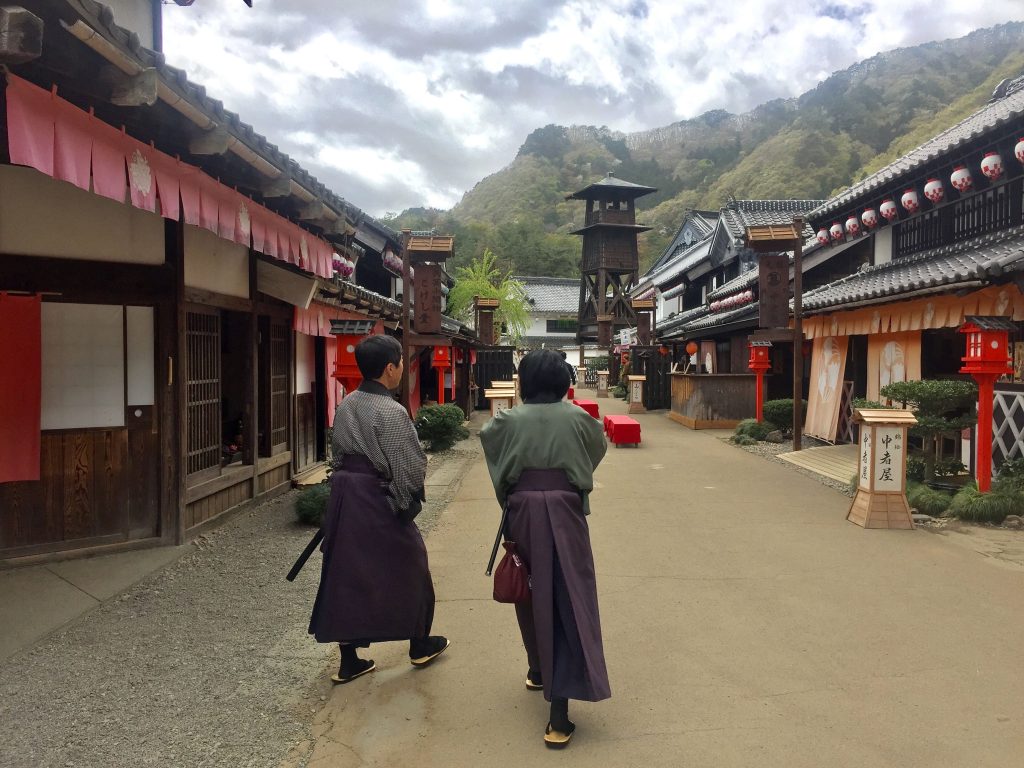 The inviting aroma of yakitori (chicken on a stick), basting over a roadside stone fire kiosk, wafts in the air as sho (merchants) and ko (artisans) wearing attire from the Edo Japan era greet you at the entrance of each of their thatched-roof village shops.

You attempt to make your way across the street, through small crowds of people wearing gorgeous, colorful yukatas (Japanese cotton kimono for casual wear) when a man dressed in a traditional samurai (translated as “one who serves”) robe appears, pointing the tip of his sword in your direction, challenging you to a friendly duel.

These are some of the lovely sights and sounds of Japan’s Edo Wonderland Nikko Edomura, an exquisite theme park based on the Genroku, Edo Golden Era. 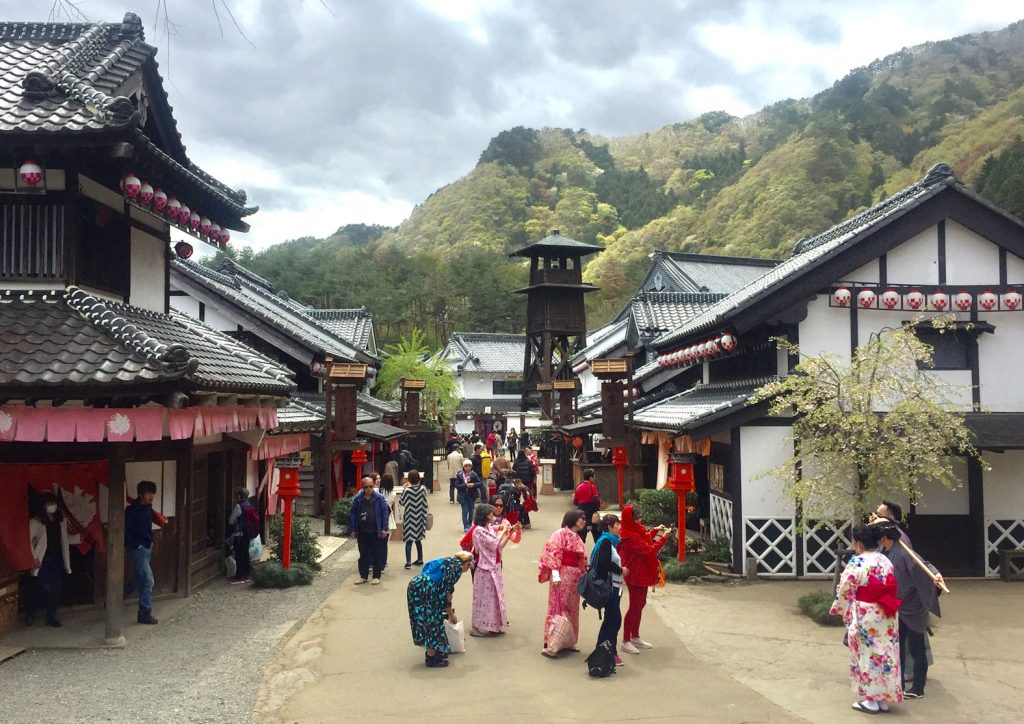 Edo Wonderland is located in Nikko City, in the remarkable Kinugawa district of the Tochigi Prefecture on mainland Japan.  It’s a two-hour train ride from Tokyo’s Asakusa Station via the Tobu Rail.

The park also hosts seven theatres featuring kabuki (classical Japanese drama) performances, outdoor theater shows, parades, seasonal festivals, street performances, and special events.  Speaking of parades, if there is ever a parade you won’t want to miss, it’s the Oiran Courtesan Procession, which was typically open to only a very select sect of the high society during the Edo Period.  The stealth-like movements, immaculate makeup artistry, and ornate kimonos will mesmerize viewers. This parade is usually showcased later in the afternoon, giving visitors a chance to plan the day accordingly. 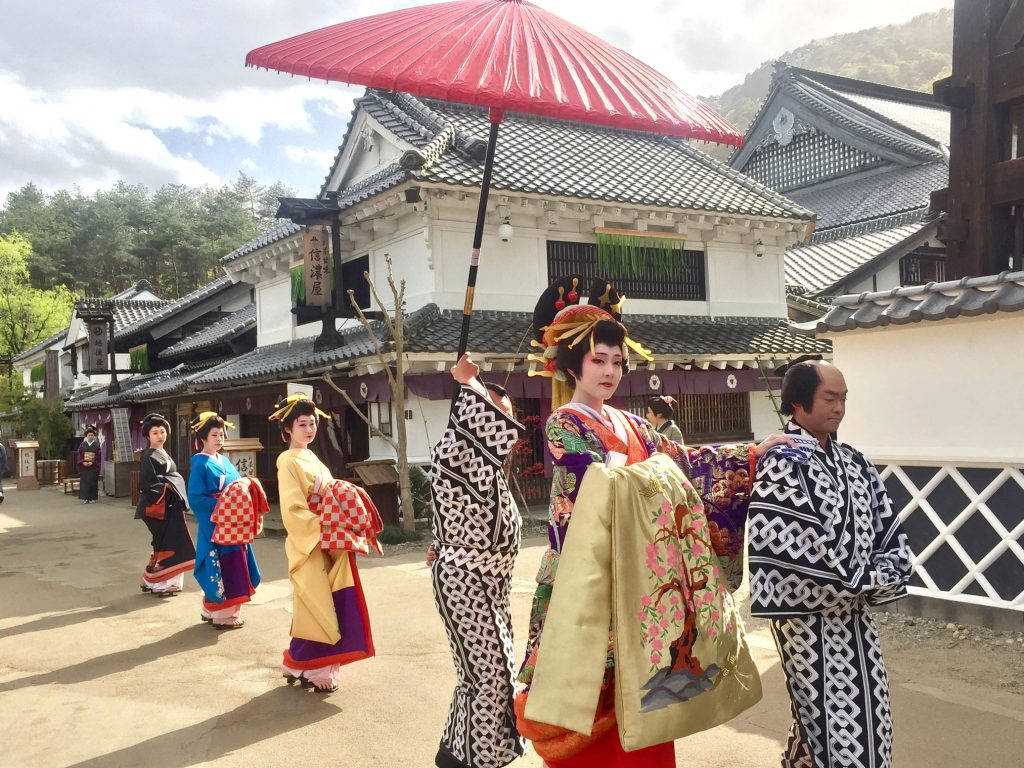 In addition, the park showcases a range of unique visitor experiences for all ages, including traditional Japanese archery, shuriken (ninja star) throwing, and their main attractions: the amazing ninja action show; ninja trap house; ninja maze; and even a ninja workshop for kids. 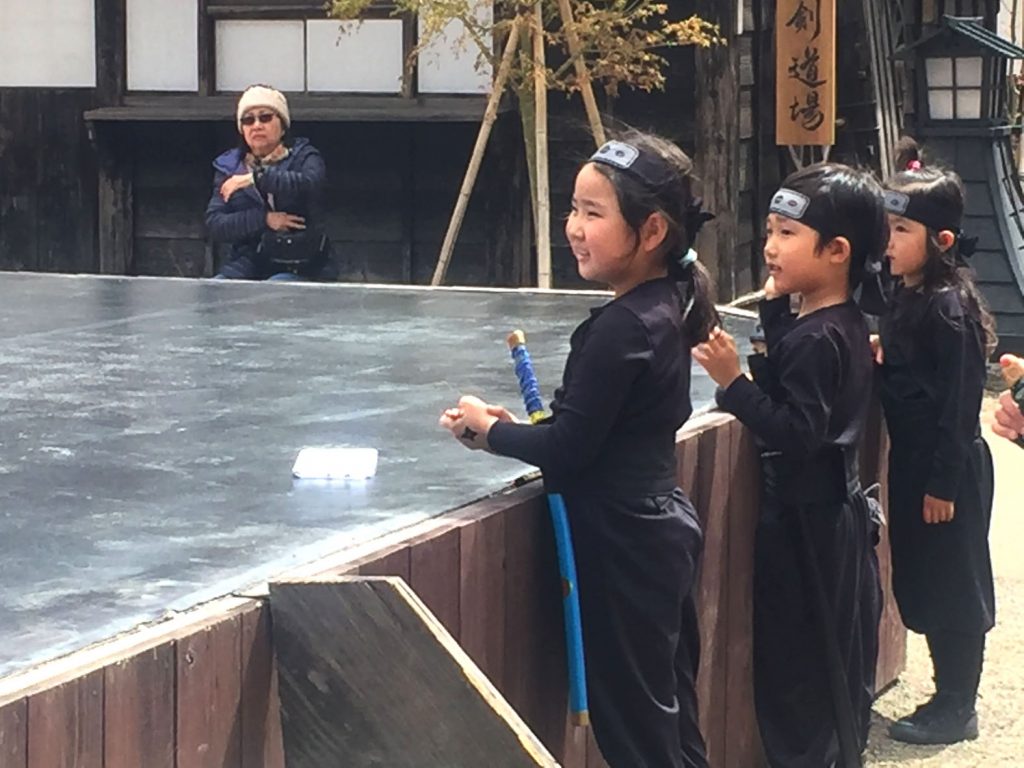 It’s common to wear a yukata at any time of the year in any place in Japan, especially during festivals, or in certain theme parks, and Edo Wonderland is just the place to don on traditional Japanese fare.

Come dressed in your own yukata, samurai outfit, ninja attire, or even outrageous anime cosplay just for kicks, and see how the village “locals” treat you according to the social class of your outfit.  You can even visit their Henshin Costume House to select a certain outfit to walk around in. But be mindful of the social caste system during the Edo era. 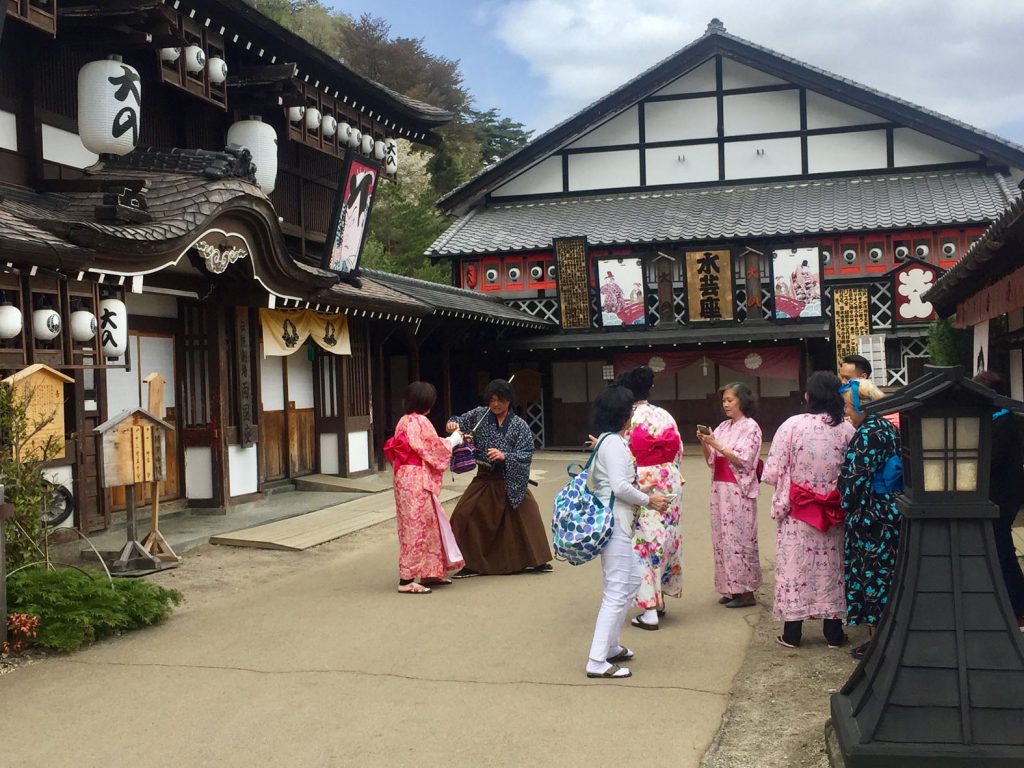 Back then, the sho and ko (merchants and artisans) were at the bottom of the social class, followed by the no (peasants/farmers and fisherman), which made up about 90 percent of the population.

The ronin (masterless samurai) come next in the social order, for they were powerful in number, yet beholden to no one.  The ronin are then followed by the samurai (paid soldiers), who were hired by daimyo (noble lords) to defend their land in exchange for shelter and agricultural goods.  Only the shogun (military leader who ruled Japan) was more powerful than daimyo, and above the shogun was the Emporer himself. 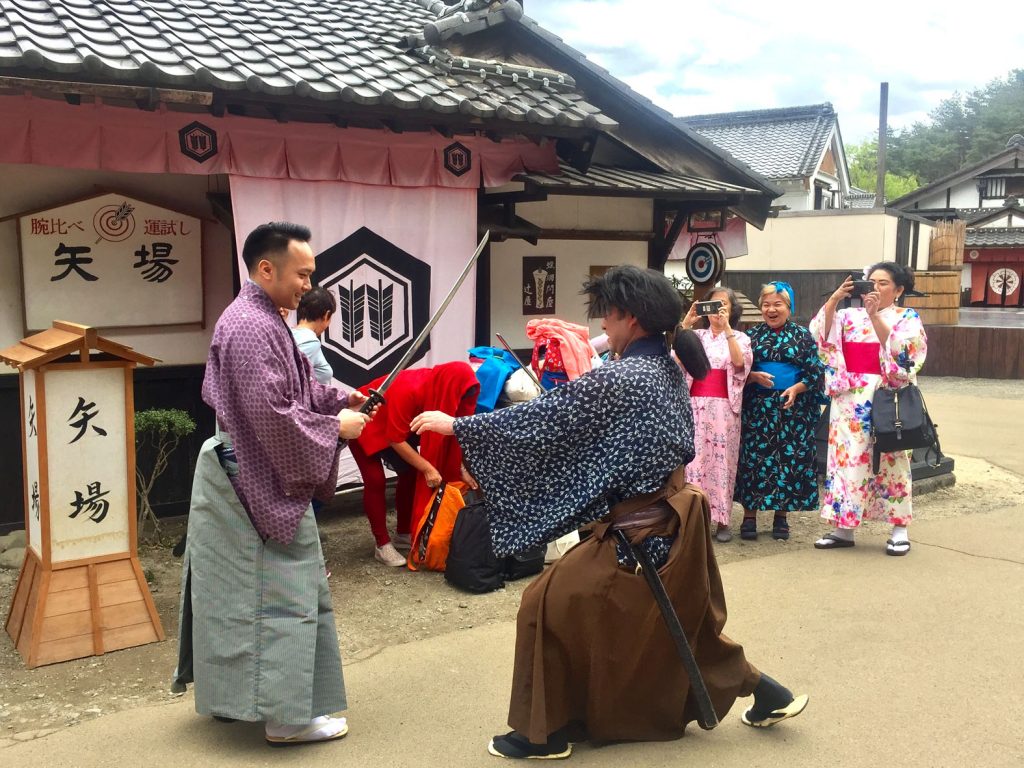 It’s interesting to note that the shinobi (“to steal away, hide”), more commonly known as ninja, cannot be found anywhere on ancient Japan’s social caste system.  This is because many of them held normal day jobs that would fit into the system, such as farmers, fisherman, merchants, or even those who mix medicine.

Some used their day jobs as a cover for spying and infiltration activities.  Then, they would strike at night, carrying out execution roles. They were most often recruited as paid agent assassins by the lower classes, or some samurai to act as their “ranger scouts,” and sometimes, even paid by corrupt government leaders.

Unlike the samurai, who found it more honorable to fight face to face, guided by the bushido, an ancient code of warrior ethos, ninjas by contrast, specialized in infiltration, sabotage, espionage, ambush, and assassination, utilizing unorthodox fighting methods and non-traditional, small weapons, such as the fukiya (deadly blowpipe), or the shuriken. Some samurai by day even doubled as ninja by night. 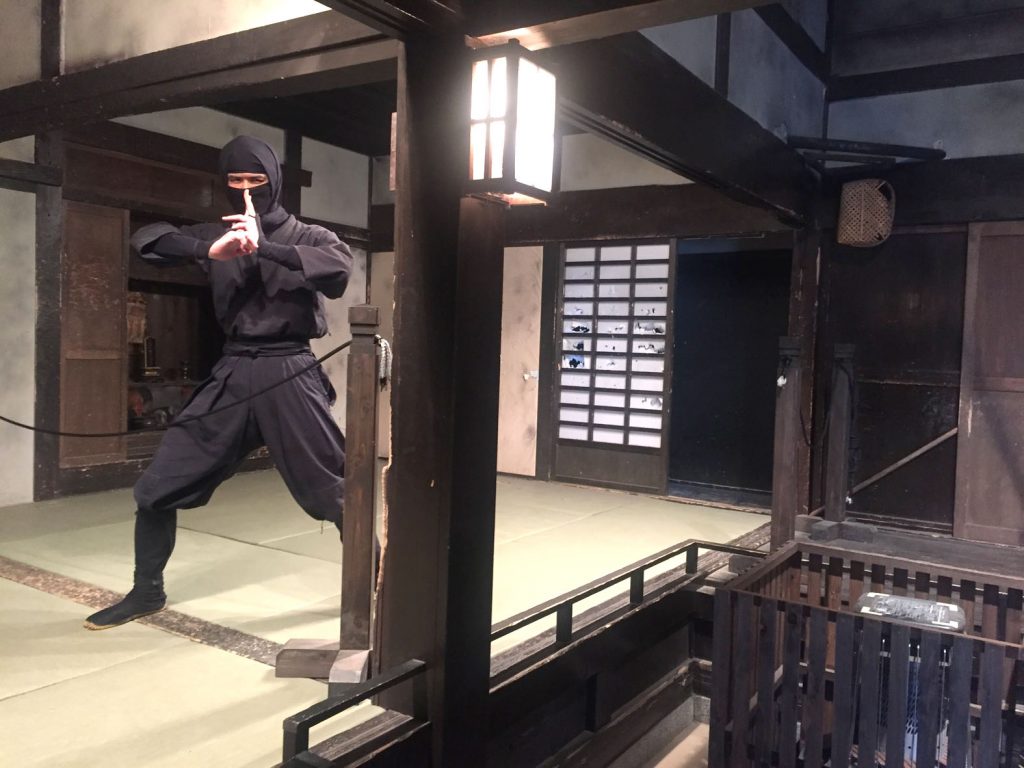 Although Edo Wonderland is known as Japan’s finest “ninja village,” you won’t see the grounds teeming with ninjas, as some might expect.  In true social class conduct of the era, what you’ll find are quite a few characters dressed as sho, ko, and no re-enacting daily living activities of the Edo Period.

Characters in samurai outfits patrol the grounds quite frequently, ensuring safety of village residents and visitors.  You might even find a few daimyo seated at one of the theaters enjoying a kabuki performance, or tending to their kids at a parade or special outdoor event. 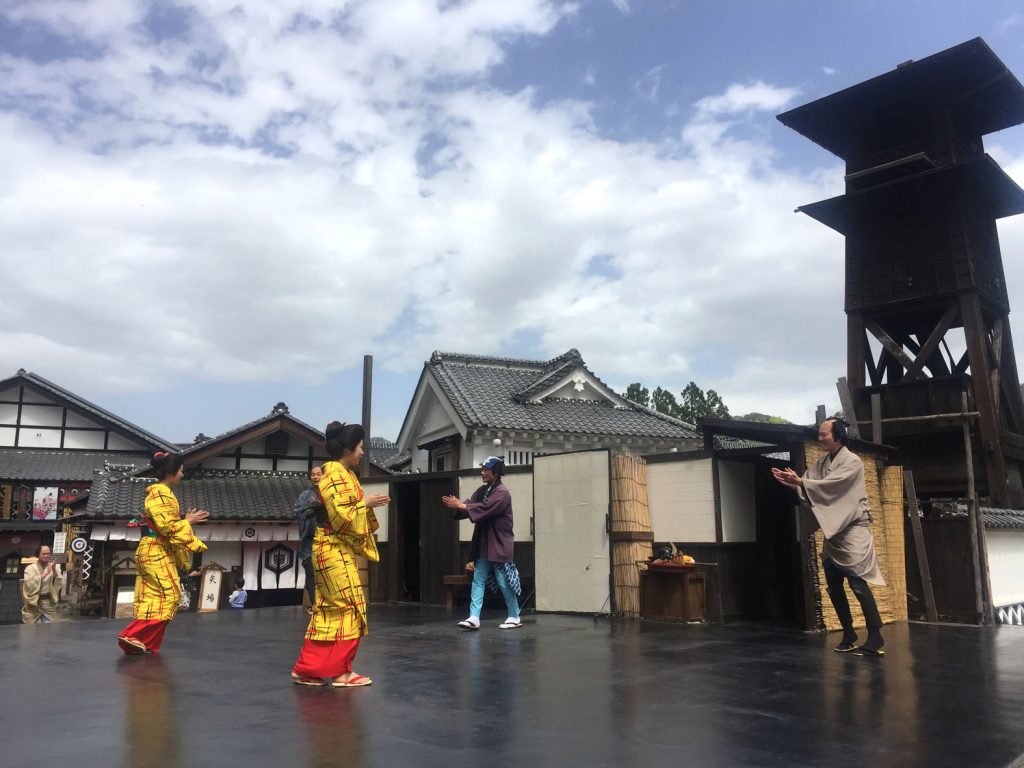 As for the ninjas, they tend to be “in hiding,” especially during the day since their all-black attire can be easily seen among the sea of colorful yukatas and peasant wear. But if you really want to engage with a ninja here, you’ll have to go search for them in the ninja maze, but be careful not to get lost, or you might miss the next scheduled theatre show!

Another place where you can find a ninja is in their trap house.  Here, a ninja or two will greet you at the entrance, and lead you through the various trap doors and secret passageways throughout the house.  But be very careful because this activity could be kiken’na (dangerous) for those in less than average-to-stellar health conditions. 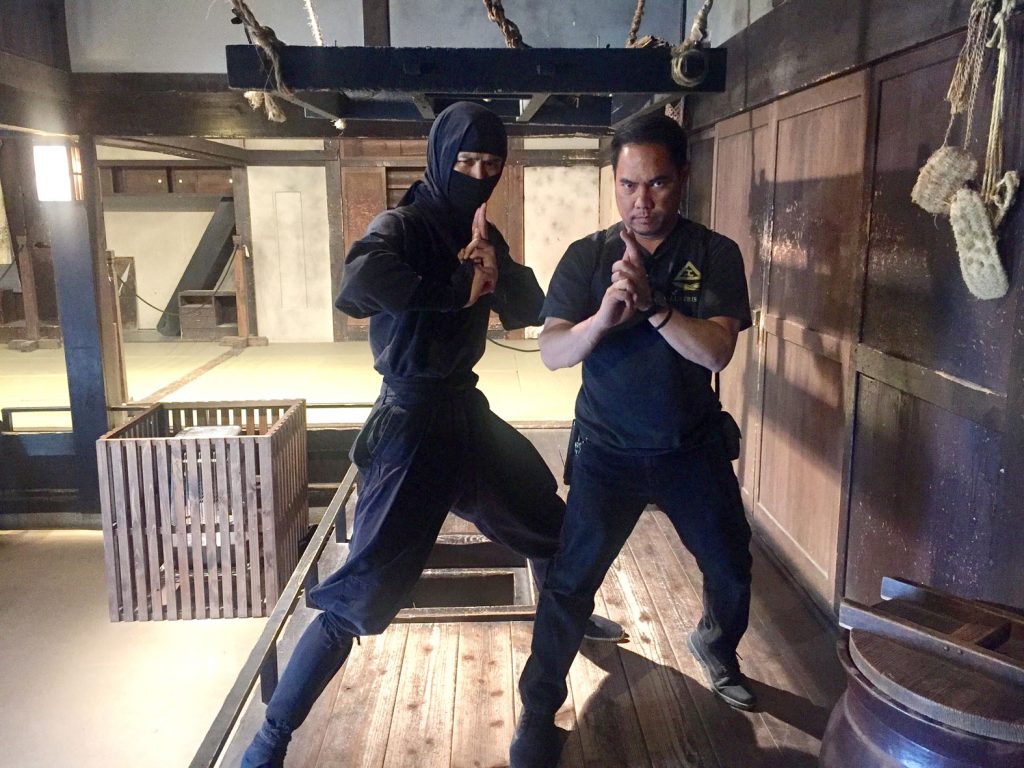 And if seeing a random ninja here or there isn’t enough, you’ll definitely want to check out the remarkable ninja action show.  Better yet, be sure to plan your visit around this show time because it is certainly a sight to see. To miss it is to live in regret, at least for the rest of your visit in Japan.

What you’ll find is a clan of ninjas performing a wide plethora of gravity-defying tricks with stealthy precision. If it’s ninjas you came to see, this is the place!  The downside is that flash photography is not permitted during the action show.  You can attempt to take photos without a flash, but much of the setting is very dark, so photos won’t do any justice.  It’s best to just enjoy the show, and try to catch a ninja or two right outside the exit for a quick snapshot. It’ll be worth the wait. 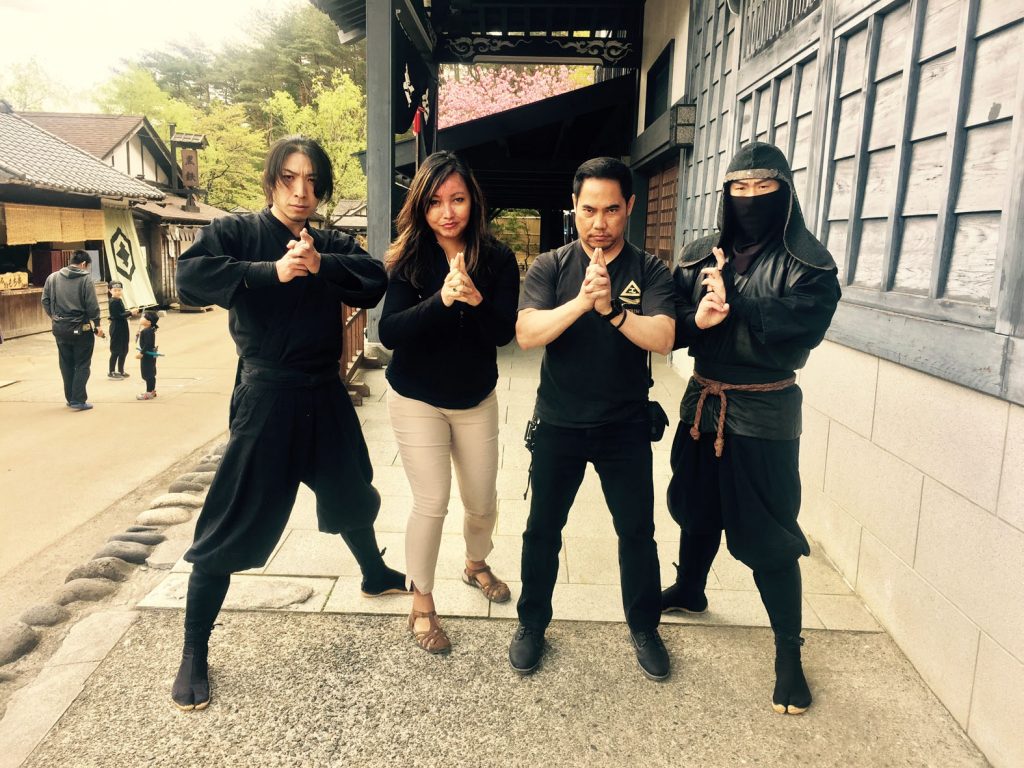 Ninjas aside, the grounds itself at Edo Wonderland is quite a sight to behold.  It’s no wonder why this place is selected for certain movie settings. While much of modern-day Japan consists of commercialized, concrete digital cities such as Tokyo and the like, it’s quite a treat to wander outside city limits into land in its more “natural” state, to take a step back to a simpler time when toxic vehicle emissions and socially-inhibiting mobile devices weren’t even a thing. 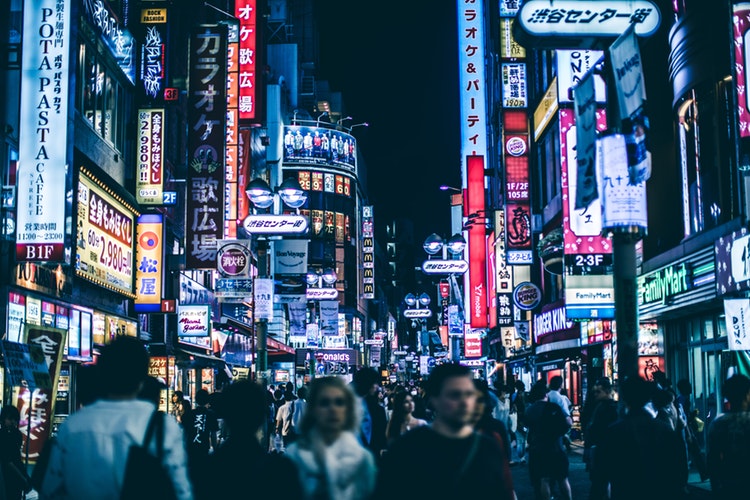 Perhaps it’s standing on the park’s main bridge, overlooking a small stream gently ferrying fall leaves or cherry blossoms, or maybe it’s sitting on a bench, overlooking a koi pond that helps bring harmony to your soul. For some, it might be offering incense at a nearby shrine, or shopping in the village market in search of that perfect find for someone special back home. 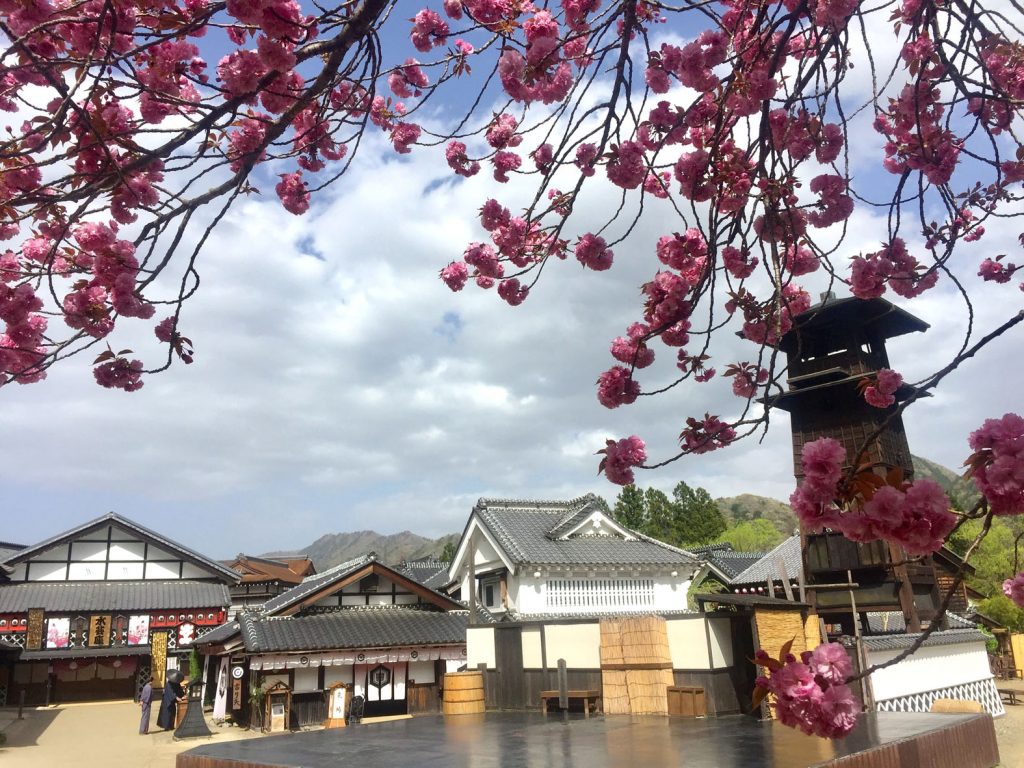 Whatever the case may be, you’ll find every corner and every angle of this place to be remarkably majestic, so much so that photos alone do not do it any justice.  It’s just one of Japan’s many places you’ll have to experience for yourself!  For more information on Edo Wonderland Nikko Edomura, visit http://edowonderland.net/en/. 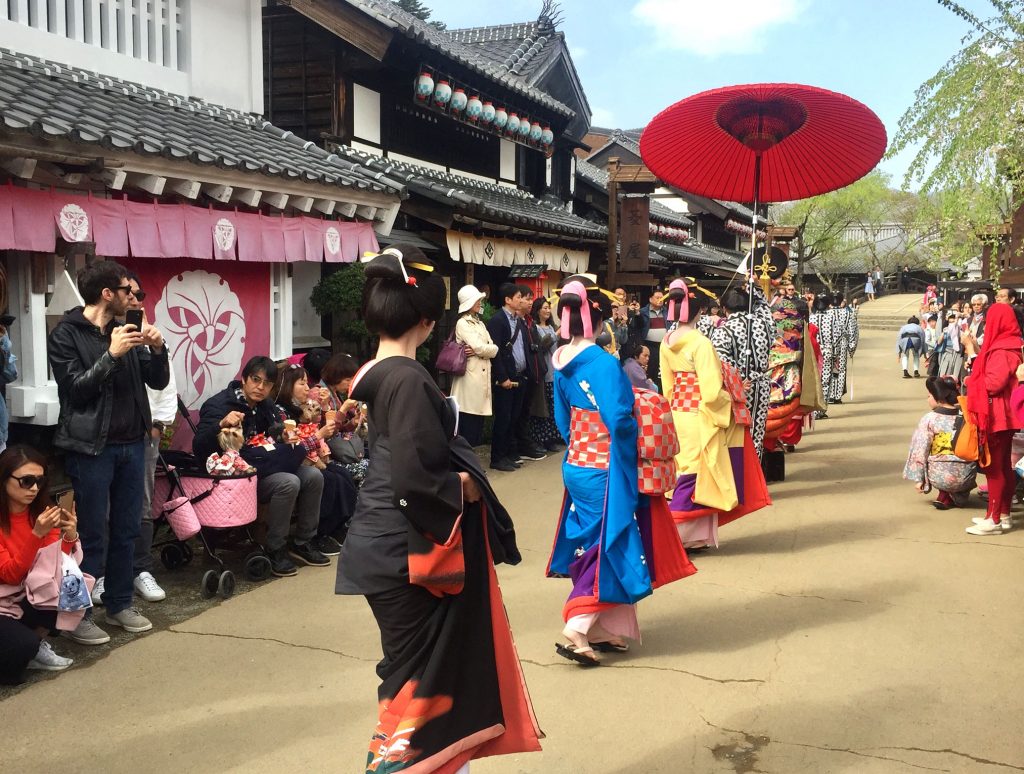